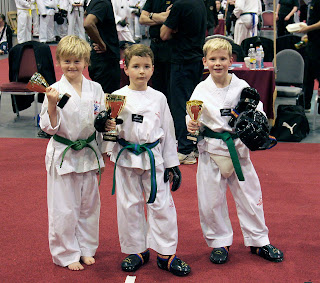 Congratulation to all the boys from the Cowbridge innerspirit Taekwondo school who competed in the British Championships on Sunday 27th of November 2011.

The tournament took place at the International Arena in Telford and had nearly 2000 competitors from all over the UK and Europe.

A special mention to Rhydian Williams who fought extremely well and got a bronze medal in the biggest tournament of the year!

Rhydian showed a lot of confidence and skills in his third competition and was only narrowly defeated in the semi-finals after 5 hard fights.

Well done to everybody from the Innerspirit-martialarts clubs!!!