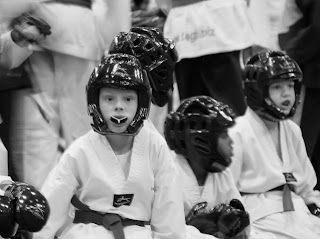 A quick article on the benefits of sparring in class.

Shy kids find it hard to cope with confrontation. Teasing in the school yard can ruin their day. And a threat from a bully can lead to poor self-esteem and many other problems. Through Taekwondo sparring, children will learn to face up to confrontation.

Good Taekwondo instructors build up children sparring skills slowly and make sure they practice in a safe environment. So at first Taekwondo kids face a couple of kicks in a drill, may be a few punches... And in time they build up to full sparring bouts lasting around 1-2 minutes. Through their sparring training, children will learn not to panic and not to run away. They will know not to turn their backs, but stand up tall and face their aggressor. They will be able to think clearly under huge pressure and will learn how to hit back in a measured way with self-control. Their confidence will grow tremendously!

When sparring, the children are well padded up in Taekwondo sparring gear. But the odd bruise is part of the territory. (Serious injury in kids sparring is highly unlikely). When kids get a knock it's easy for them to burst into tears and give up. But over time, trough sparring sessions and training, they will learn not to let the situation beat them. They find strong spirit and determination inside themselves.
They learn to take a deep breath and clear their mind of negative thoughts. They learn to keep going! They learn that giving up is not an option.

And the end result of coming through all these barriers and fighting these battles, is a massive increases in self confidence, self esteem, and overall mental toughness.
Suddenly the taunts of the school bully seem less of a problem.

Through sparring, children also learn to deal with success and failure. Your child might be naturally good at Taekwondo sparring, and enjoy some early success. But if your child enters competitions they will eventually come up against an opponent who is better than them on the day. And they will lose.
For a very confident child who is used to early success and winning all the time, this can be very tough to take. It can be very hard for them to handle themselves in the face of failure. The adrenaline rush of competition makes it difficult to stay calm, and they can feel very upset and very low. Many children will unfortunately want to quit at this point!

And that's why sparring in class is very important. You do not always win in class and have to deal with failure now and again. This will prepare the children for the highs and lows of competitions.

If they learn how to stay humble, reflect on what they did well and get back to training with determination and good humor, then they learn a very important life lesson. And they grow stronger in the process!