Why do we practice patterns? 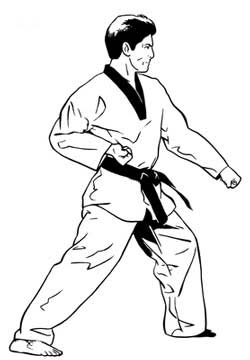 Often in class, students ask me the benefits of Taekwondo patterns and why we practice them over and over again? So
I hope the following will help understand the importance
of performing traditional patterns and how they can help
you develop your Taekwondo!

What is a Pattern?
A pattern is a set of fundamental movements, mainly defence and attack, set in a logical sequence to deal with one or more imaginary opponents. Patterns are an indication of a student's progress a barometer in evaluating an individual's technique.

Why do we perform Patterns?
We practice patterns to Improve our Taekwondo techniques, to develop sparring techniques, to improve flexibility of movement, master body-shifting, develop muscles, balance and breath control. They also enable us to acquire techniques which cannot be obtained from either fundamental exercises or sparring. The following benefits can also be obtained while performing Taekwondo patterns:

Why are there twenty four Patterns?
The reason for twenty four patterns in Taekwondo is because the founder, Major General Choi Hong Hi, compared the life of man with a day in the life of the earth and believed that some people should strive to bequeath a good spiritual legacy to coming generations and in doing so gain immortality.
Therefore, if we can leave something behind for the welfare of mankind, maybe it will be the most important thing to happen in our lives, as the founder says:

"Here I leave Tae Kwon-Do for mankind. As a trace of a man of the late 20th Century. The twenty four patterns represent twenty four hours, one day or all of my life."

The following points should be considered when performing Patterns:
1. Patterns should begin and end on the same spot. This will indicate the performers accuracy.
2.Correct posture and facing must be maintained at all times.
3.Muscles of the body should be tensed or relaxed at the proper critical moments in the exercise.
4.The exercise should be performed in a rhythmic movement with the absence of stiffness.
5.Each pattern should be accelerated or decelerated according to instructions.
6.Each pattern should be perfected before moving to the next.
7.Students should know the purpose of each movement.
8.Students should perform each movement with realism.