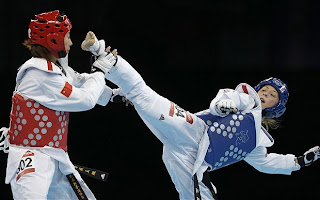 Jade Jones, a 19-year-old from Flint in North Wales, became the first Briton to win Olympic gold at Taekwondo by defeating the Chinese world champion Yuzhuo Hou, in the under-57kgs featherweight final.

Jade, nicknamed the "Head Hunter", simply blew everyone away in the under-57kg starting with a 15-1 victory over Serbian Dragana Gladovic and then putting out world number one Tseng Li-Cheng of Chinese Taipei in the semi-finals.

The home crowd were in full voice again 24 hours later as Lutalo Muhammad delivered a first men's Olympic medal when he recovered from a quarter-final loss to eventual silver medallist Nicolas Garcia Hemme to come through the repechage and beat Arman Yeremyan of Armenia in the bronze contest.