Tuesday, November 13, 2012
On Sunday the 4th of November Miss Jade Jones, Olympic gold Medalist of Wales, made a special appearance and presented a Taekwondo training seminar at the National Sports Centre for Wales in Cardiff.

Jade who is now the current World Taekwondo number 1 and Olympic Champion was promoted By Mr Joseph Schembri and Mr Gordon Fearn, both former Taekwondo World Champions who are very well known throughout the Martial Arts community.

Jade began training in Taekwondo at a very young age in Flint, North Wales. When she was a teenager her grandfather brought her down to train at the National Junior Welsh squad training in Cardiff under Mr Schembri and Master Gianni peros. From a young age her talent shone through and after achieving many titles and representing Wales in non Olympic TKD, it was obvious she had bigger achievements ahead. Jade then went on to train in Manchester, at the British TKD Olympic head quarters and the rest is history. Jade is the 1st Olympic TKD champion from the UK and has a lot more success to come.

On the day there were over 200 students who took part in the class and everybody had a chance to see the Olympic champion in action, listen to her precious advice and even train with her.

Jade taught two separate classes from children aged 4 years to adults in there 50's. She showed all the skills that made her the great Olympian she is today and she gave a good account of herself by spreading her knowledge of the sport to all the up and coming TKD stars.

It was a very special day and this would have not been possible without Mr Schembri and Mr Fearn who organised this fantastic event and Mr Brian Taylor who worked hard all day!!

Jade Jones is truly our Olympic Champion, on behalf of all Welsh and British TKD students, we thank her for attending our seminar and we wish her the best for Rio 2016!! 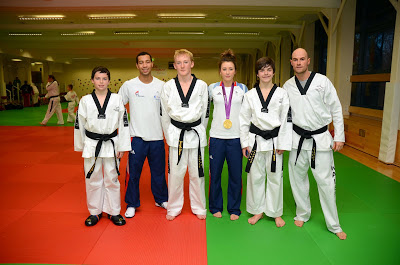 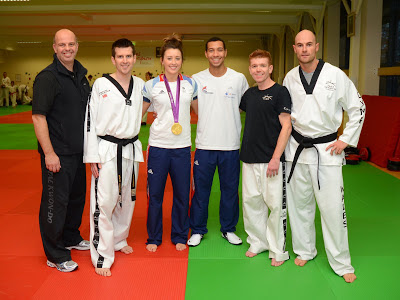